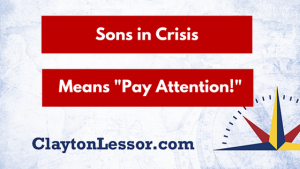 Is your son in crisis? He is saying “Pay attention!”

The word “crisis” appears with regularity in America’s culture these days. It seems just about every problem and situation can be evidence of something much larger that demands our immediate attention.

I believe we have a different sort of crisis on our hands. It is prevalent yet receives little media attention. Our boys are in trouble and it’s not getting any better. As a society we’re failing our boys.  I have worked with more than two thousand boys, aged 11 to 19, since 1996 and have witnessed the complete range of problems boys face today, from bullying to heroin addiction, with all the painful and destructive forces in between.

It’s why I wrote Saving Our Sons – A Parent’s Guide to Preparing Boys for Success. This is more than “we’ve got problems.” It provides answers, none of them easy. They are workable solutions for moms and dads to help them understand their sons and, just as importantly, what needs to be done, as quickly as possible.

“It is easier to build strong children than to repair broken men.”   by Frederick Douglass

That quote has been my guiding principle as I developed The Quest Project®, a program to build strong children. In this case, boys on their way to becoming men. After twenty years, more than 2,000 boys have graduated from The Quest Project®. They have transitioned from troubled teens to productive adults. One boy told me he wanted to be a serial killer. He is now a lawyer. It’s not easy getting them there, but I know it’s worth it. And it’s incredibly important, especially in today’s world.

Drugs Are Worse Than Ever

Today’s world: not a pretty picture in much of America’s society. This is evidenced by the growing epidemic of heroin use among young people. No longer the drug of choice in low-income neighborhoods, inner cities, fringe criminal elements, heroin has invaded every state with devastating results.  The numbers are alarming. The Centers for Disease Control and Prevention (CDC) has found that heroin use during 2011-2013 increased 62.5% since 2002-2004. In 2014, more than 900,000 adults and young adults ages 12 and older used heroin in the past year. The growth in heroin use is being driven by young adults ages 18 to 25.

The numbers are staggering. My community is becoming overwhelmed with heroin- chances are yours is too. Most parents don’t know where to turn or how to deal with a son who displays signs of drug use.  In my recovery work with boys, we identify “the wound” – a traumatic event – to understand what is going on- the root of the addiction. It is imperative that this takes place, so we can approach the situation in a straightforward manner. I’m convinced it is the only way we can save our kids.

The Root of the Matter

The root of the crisis is the “Absent Father.” Boys who grow up without fathers grow up at a disadvantage. The numbers tell the story.

The solutions are not quick and easy. These problems cannot be fixed with a couple of consultations or a prescription from the family physician.  The Quest Project® provides a road map to healing, a way to save our boys. It includes a modern “Rite of Passage.” This is a critical time in a boy’s life, and parents need to be aware of their son’s needs and their parental obligations.

I fear we will see further deterioration of the situation unless parents take immediate steps. For instance, one out of three boys currently lives in a home without a father or another strong male role model. This doesn’t necessarily mean that “Dad” has left the building. It also can mean that, although dad is there physically, he is absent emotionally. He doesn’t have time to spend with his son. He works long hours, is divorced and feels shut out, or he leaves it up to Mom. Maybe his son doesn’t act like he wants to be with him.

One of the keys is “time.” I recommend fathers spend at least three to five hours a week with their sons, one-on-one. Being a father can be a burden at times, but it is a role that must be taken seriously.

Unlike many academics, my work has been developed through personal experience. I was the oldest of three kids in a working-class family. My father was the classic example of the “Absent Father.” He was an alcoholic who physically and mentally abused my mother, my siblings, and me.

My childhood was a nightmare and I floundered in school because of PTSD. The majority of my youth was spent walking on egg shells. I was just a little boy yet I was tasked with keeping my brother and sister safe.  But I fought back, determined to escape the pain and damage, to turn away from the bleak future that possibly lay ahead. I wanted to put meaning to my suffering, to find solutions. I joined the Air Force, began to develop as a man, and eventually discovered my calling: create healthy lifestyles by teaching, facilitating, and example.

Healing is a journey. It doesn’t happen all at once.  Would you agree?

Posted in From Boy to Man, Parenting Tips, Saving Our Sons, The Quest Project