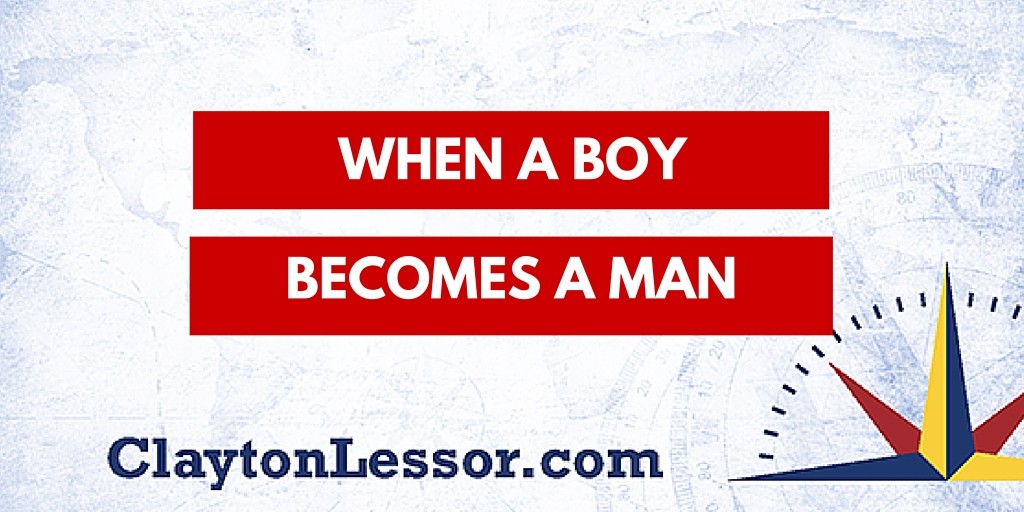 Think about this: When a girl transitions to a woman the “signs” are typically obvious and unmistakable.  However, when a young boy begins to transition to a man it can sneak up on you; the signs aren’t as obvious.  You know it’s going to happen, but what do you look for?

Things Are Beginning To Change

At approximately 11-13 yrs. of age “on average” a boy produces a greater amount of testosterone.  The production of this hormone will “show” by more aggressive behavior.  He wants to rid himself of this conflictual feeling most commonly by punching something.  As his angst/confusion intensifies and he is experiencing a rush for the first time, it takes time to manage these feelings.  I recommend parents of young boys buy a punching bag and present it to him explaining it’s a great release when he needs to vent (show him how to use it appropriately), or sign him up for Karate! It’s also during this time he’ll begin to think about who he will become, what he cares about and what he stands for – usually in silence.  He needs a sense of mission, competition, group involvement as well, I know I say this often but because it’s important.

“The best way to “learn” about becoming a man is a healthy male example or role model.”

Boys need to be shown how things work, how they were made, where they come from because he’s physical and visual!  I’m sure you know what I’m talking about here. Think about how many times your son took a toy apart when he was little.  He wanted to see how it was made and if he could put it back together.  Transformers were over the top popular with boys because they can “make” this cool car into a big scary creature!

A Man Among Men

Becoming a man means growing, learning and understanding – not sitting on the couch playing video games.  Teach him things he can do like:  how to fish, cook, garden, change a tire on the car.  Believe it or not, he needs responsibility.  He probably will resist and want to go back to the couch, it’s comfortable there. Be prepared and set up some natural consequences ahead of time, for instance, “son, when you’re finished with homework/chores you can play your video game.”  He needs choices to feel a sense of his power.  Keep this in mind, if he feels he is making the choice he will more likely buy in and do it!  He needs to feel accomplishment; again think about why video games are addictive to boys, they get to higher levels which make them feel powerful.  He needs to do his own thing which gives him a sense of growing and looking more mature (the get).  He needs you to see him do well and wants you to not notice the mistakes.  This is active responsible parenting.

Pushing Away From Mom

Unfortunately Mom, part of this transition is letting go of you, pushing you away – his way!  He doesn’t understand this (it’s innate and irrational).  It becomes a push-pull time for the two of you.  He wants you but not all the time; he wants you to be somewhere close, but not noticeable to him or his friends.  My expert opinion from years of experience and research is “let him go through it and stop trying to get ahead of his mistakes, and more importantly from his feelings.”  This process can be character building and empowering. Are you confused by your son’s needs and wants?  Share your thoughts in the comments or on my Facebook page, and I’ll try and help.

Posted in From Boy to Man and tagged boy to man, boys to men, life lessons, quest project, teenage years