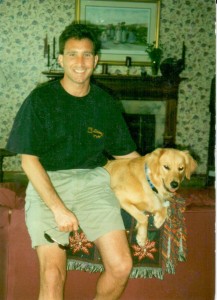 Continuing the story…I do this work to help wounded, broken boys grow to be successful men.  I know how, I’ve been there.

The Air Force changed my life and offered the stability I needed.  It was returning to the civilian life that still would prove to be a challenge, and I would come to realize I couldn’t do it alone.

I met my first wife just out of high school.  We dated a couple of years.  At the age of 20 I was excited and in love and couldn’t wait to get married, to share my life with someone.  Unfortunately, the abuse from my Dad didn’t end.  I visited my Dad (who had spent his day drinking) while home on a military leave to talk about the wedding, he went into a rage and nearly choked me to death.  My best man was with me that day just in case things went bad, if not for him I would have died.  I did get married, I remember being in a state of shock during that time, wondering would this ever stop.  I rarely spoke to or saw my dad after that.  After six years my marriage ended; we just didn’t have anything in common anymore.  We were just too young.

Needless to say I did what most newly divorced guys do, I searched for love again.  I met my second wife after six months and fell in love again!  We had little in common except we both loved to have fun!  I had just got my Officer commission, and I was at the highest point of my life.  We married on Veterans Day in grand military fashion with full military honors!  We did have fun but when life brought some serious issues our way we just couldn’t work through them.  So two years later I was divorced yet again.

I decided just to focus on my schooling, have as much fun as I could and date as many girls as I could.  I was running.  If I kept busy enough, I wouldn’t have to deal with the pain and deep wounds I was carrying.  This went on for a few years.  I had my share of failed relationships and plenty of sleepless nights wondering where my life was going.

My mom remarried too, our relationship was rocky at best.  I didn’t like the idea of a stepfather, but I did like it that he took good care of mom.  And oddly enough it was my mom that suggested I go to therapy.  At first I didn’t give it a second thought.  “I’m not telling anyone about all this crap” was my first reaction.

Then it happened, I woke up one day and made a decision.  I’m going to heal this, ALL OF IT, and I’m not stopping until it’s done.  My life would change forever.  I committed to counseling and therapy and to making changes in my life to be a better man.  I had hope again.

Life throws us “curve balls,” what are some of your more challenging times?

Who is Clayton Lessor?

Hey Mom, I Joined the Airforce