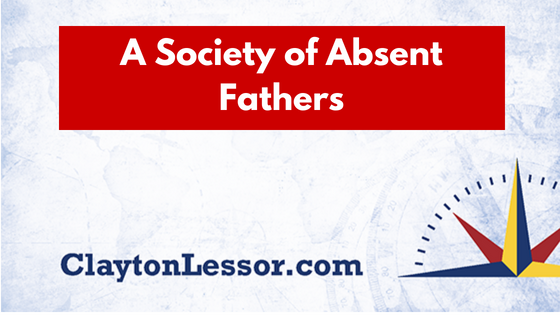 We’re all entitled to an opinion, right?  Do you remember Andy Rooney, he used to give his straight forward and sometimes controversial opinion at the end of 60 Minutes?  I’d like to share mine and it has to do with this, the effect the absent father is having on society.

I’ve not been shy about writing and sharing stories about my father and the effect his alcoholism and abuse had on our family.  There is however one thing he taught me as a young boy that’s missing today-RESPECT!  He took pride in his well-behaved, polite, respectful children.

My dad insisted on “please” and “thank you.”  He made sure his kids were respectful to God, country, others, young and old.  Being disrespectful in my house wasn’t an option; it was a core value not to be challenged.  He never had to say a word, we got “the look” and knew exactly what it meant!

Today we see examples all around us of disrespectful acts.

I could go on and on, but you get the point.  These examples are being taught to our youth as the norm!

When did “the land of the free” translate to acting disrespectful?  I appreciate freedom and I also appreciate values and restraint!

I believe it’s largely a result of the absent father.  Previous generations of men (like my dad) took a hard line with their kids by teaching respect for each other and country.  There was a strong sense of right and wrong; good and bad.  Today, sadly it’s hard to find and the lines are blurry.

In my lifetime I don’t remember another time when there was so much anger and hate.  Anger isn’t wrong or bad, unless you’re living your life angry.  It can hurt you by causing physical ailments and it can cost you relationships.  Hate is a lot of anger often directed at specific groups; there are multiple examples of that in history!  We all have responsibility in fixing this.

I’m calling out the men, specifically the dads because you have influence on the next generations.  Get plugged in, not only by teaching respect in your family but by living a respectful life and being the healthy example.   Let’s turn this ship around one family, one person at a time before it gets any worse.

Do it for the sake of the next generation.  Are you with me?