Admittedly I was a bit apprehensive allowing a reporter to “sit in” a Quest Project group.  However Jeanette Cooperman of St. Louis Magazine has done a truly professional article about what she experienced!  I hope you enjoy it.

“In Search of Manhood”

A St. Louis therapist says we’re making it harder and harder for boys to figure out who they are

“We all have gifts,” says Lessor, “but unless your parents mirror back, you will drop your gift. Parents filter their children.” 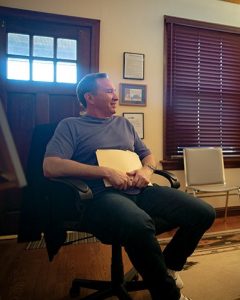 A little nervous himself, the therapist hurries me past the waiting clients and into his office. Clayton Lessor has written two books and worked with 2,000 adolescent boys, developing a 10-week program, Quest, that helps them recover the wisdom our society’s forgotten. But he’s never let a reporter sit in.

Tonight’s a meeting with parents, and they’ll be ranking virtues from what matters most to them to what matters least (which is where things really get interesting). “The boys did it last week,” Lessor explains. “The parents don’t know yet that they’re going to compare theirs with their sons.’ If something’s way down on the list for one and way high on the other, this will help them connect—and find out where they bump heads.

“I already know where they bump heads,” he adds dryly. One boy’s mom and dad divorced, “but they never processed it with him. He’s angry that his dad’s not there with him, and his mom’s still angry because his dad had an affair.” Another’s been cutting, saying he wishes he were dead, banging his head against the wall. Another, bright and self-contained, has suddenly begun bullying a younger sibling. Their parents are in the process of splitting up, and the dad reminds Lessor a little of his own dad, who’d “fake-hit, make you flinch, keep you in fear.” Lessor’s dad drank at home but, like many of these kids’ fathers, charmed the world. “It’s crazy-making,” he says.

But it gave him compassion.

“Parents tell me, ‘He’s not going to talk to you.’ I say, ‘Just give me a few minutes with him.’ I have not had a boy walk out of here where I was not able to touch that wound.”

We go back into the living room—Lessor works out of his cozy house in South County—and the parents offer updates that are extra thorough for the reporter’s sake. “My son’s the king of temptation,” a mom says. “If it’s there, he’s going to try it. He’s very loving, super sweet, but also super impulsive, and I want to nip it in the bud before it becomes an issue in his adult life that he can’t take back.”

The other day, they had a long, good talk, she says, and then Adam (a pseudonym) asked, with fake casualness, “What do the other moms say about me?” A boy had told him, “I’d like to hang out with you, but my parents told me not to.” Adam teared up as he confided this—and now his mom’s crying as she relays it.

“In here, he’s really engaging,” Lessor says. It might be because of a recent bit of trouble, they agree—though the incident was more prank than crime. “I do know Adam’s got his ear to walls and doors,” Lessor says. “‘Mom talks behind my back,’ he tells me.” This might just be the boy’s perception, he adds quickly. “I remember, growing up, my mom would tell my brother my bad stories, and to me it was shaming.”

“Adam does need shaming sometimes,” she counters, “because otherwise he moves on immediately, with no remorse.”

Lessor’s lips are pressed together hard. It’s pretty clear he doesn’t agree. But he answers carefully, “Saying something right to him, that’s OK. Having a conversation that’s not meant to be heard is what I mean.”

The next parent volunteers that he and his wife didn’t know whether it was ADHD causing their son’s anxiety and depression or anxiety and depression making the ADHD worse, “but the self-harm talk was pretty scary. The other day he said, ‘I want to go in a hole and die.’” The father’s voice is quiet, but his eyes are scared.

His voice calm, Lessor says hurting himself is the boy’s habitual way of acting out the anger—which is no doubt rooted in something far harder for him to express, like fear or sadness. They’ve found a substitute, punching a pillow, but by the time the boy comes home from school and avoids talking to his parents, it’s long past pillow-punching time. “We need to find an outlet he can use at school,” Lessor says. “Males need action. We’re visual and physical—it’s biological; it’s testosterone. The punching bag’s a safe container: It doesn’t bleed, cry, talk back, call the police, or punch holes in the wall. There’s nothing wrong with being angry—it’s the behavior the anger causes that’s the problem. The world says, ‘Let’s take it away from them.’ But there’s a way to give them what they need so they’re OK.”

The biggest problem, he’s come to believe, “is the systemic absence of the father, the absence of that instinctive wisdom.” In a slower, more coherent world, shared rites of passage and a clear definition of masculinity guided parents. Today, some dads are physically absent, some emotionally absent, “but there are also systemically absent dads who are always trying to figure out whether they did the right thing.”

They plan their graduation, a barbecue in his backyard. Lessor says there will be a ceremony where they will symbolically receive their “gift,” their own coolest and most authentic trait. “We all have gifts,” he said to me earlier, “but unless your parents mirror back, you will drop your gift. Parents filter their children. This is all about seeing those patterns—and helping the boys find their true self.”