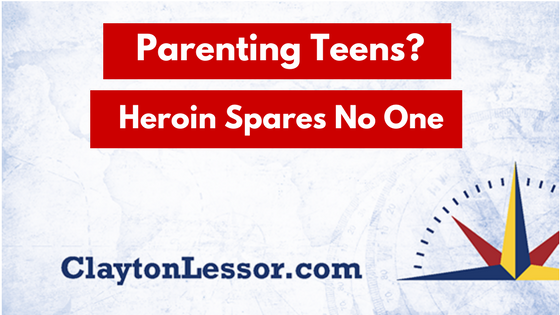 The stories are disturbing; teens addicted to and dying from heroin.   It’s happening right under our nose, in our own backyard, rich and poor communities.  It is pervasive, from schools to homes to the streets and parks.

The numbers are staggering.  But they don’t show the complete picture.

“My Son Wouldn’t Do Drugs”

That’s the most common response I hear!  Parents assume their teenager is or could be experimenting with alcohol or pot.  They never imagine, in fact, it’s HEROIN or now the latest killer FENTANYL which is even stronger.  Just like them I never imagined the time would come when we would say at least it’s “only alcohol or pot.”

I am an advocate for children so this message is straightforward.

This is a serious problem among our young people.  My hope is that every parent will consider the very real possibility that heroin has invaded their lives.  It’s the only way we can save our kids.

Parents sincerely believe that because they “experimented with drugs (pot) and with alcohol and didn’t gateway to harder drugs” that their son won’t either.

First Rule:  Drinking before age 21 is illegal.  Doing drugs is illegal and both can kill you!

Second Rule:  No two people are the same.  Your son is not you!

Third Rule:  If either parent has any addictive behavior, it increases the chances the child will become addicted!

Some Facts About Heroin

Signs to watch for: tiny pupils, nodding off easily, breathing slowly and a runny nose.  Additional signs are vomiting, scratching, complaints of constipation and nausea, drug sick, disinterest in appearance and wearing long sleeves (snorting or swallowing is just as popular as injecting and easier to hide).

“The Fork in the Road”

Eventually when an experimenting adolescent comes to a crossroad they have a choice to make.  They don’t really want much to do with smoking pot or drinking.  The other choice is chronic use and a potential gateway to harder drugs, or other addictive behavior.  That’s when my experience is effective.  I would recommend completion of a treatment program first; after completion, we can begin hard work on how to stay clean.

I can sometimes help with recovery.  When I can identify “the wound” (traumatic event), and understand the time and space and what is going on, I can become a much needed resource for you.  Your son or daughter must be part of saving themselves.  It is imperative that this is put right in front of them!

If you suspect your teenager is using any drug or alcohol, you need to seek help immediately.  Users fear the pain and sickness of withdrawal which is why they can’t stop.  It is also the reason they don’t want to stop.

Are you or a loved one dealing with addiction?  There is help and hope.  My hope is that you will seek it out now.