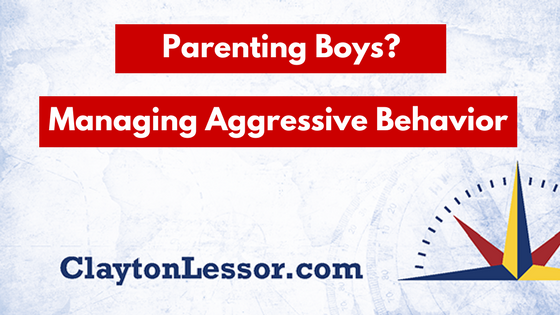 It’s a good time to talk about “aggressiveness, assertiveness and aggressive behavior!”  My recent blog on healthy masculinity was to caution getting caught up in the recent frenzy that masculinity was the “cause” for bad behavior.

Masculinity and guns don’t go hand in hand; masculinity and irrational behavior don’t either!  But what do you do when your son displays aggressiveness and/or aggressive violent behavior?

I want to focus here on aggressiveness and aggressive violent behavior.

Hopefully, you will never be in a position where you need to consider calling the police or mental health authorities to help you help your son. Unfortunately, in this age of opioid abuse, school shootings and other crises affecting our youth, the topic of “When to Get Help and How” needs to be addressed. You must learn to recognize the signs that your child has become a danger to himself or others and know what to do next.

This is a sensitive area for many parents. No one wants to call the police or the mental health authorities and report that their child is out of control. Some don’t even want to make an appointment with a therapist or talk to a school counselor. They remain in denial, ignoring red flags and justifying problem aggressive behavior until it’s too late.

Bottom line, if you have any reason to fear that your child is a danger to himself or others, safety—your child’s and that of those around him—needs to be your first and only priority. Call 911 immediately, or, if it’s feasible, put your son in the car and drive him to a hospital or police station.

Teens who are exhibiting aggressive violent behavior share many of the same warning signs, including depression and withdrawing from others. According to Psychology Today, teens who may be considered “dangerous” may also:

All of these are irrational behaviors, they are not to be confused with bad behavior.  Take any one of these very seriously.

If your son is showing aggression towards you, you must also act immediately. If there is ever a moment when a parent feels threatened by their child, it has gone too far. This is where domestic violence begins, and it is your responsibility to stop it before it does.  Is he becoming a danger to himself or others?  Police are specifically trained to handle these exact types of interactions. They know how to tell a boy that if he continues to threaten people, or hurts anyone, “I’m going to come with the handcuffs and put you in the back of the car, and you will sit in a cell” in a way that your son will probably take very seriously.

It may sound dramatic, but that kind of drama is exactly what a boy who is threatening violence needs to hear.  Ultimately it’s worth it, to put a stop to it!