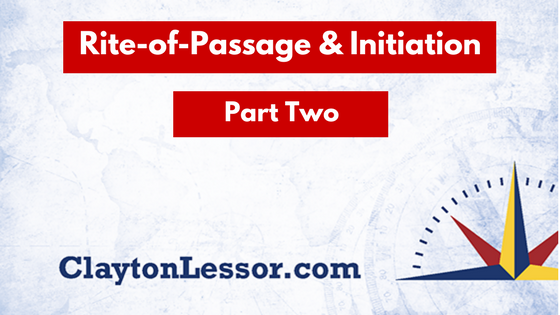 Last week I explained “rite-of-passage” and the important processes an adolescent boy goes through to become an initiated man.  Now let’s cover what being an initiated man means!

Adolescence ranges from 11-18 years of age. According to theorist, this stage of life is crucial; it gives individuals the challenge of establishing an identity, which can lead to a positive self-concept. It is not uncommon for boys to experience a surge of aggression during their adolescent years.

Many cultures offer boys challenges that enable them to find their identities and learn responsible behavior. The initiation by male elders help the boys move from their mother’s world to their father’s world.

As civilization developed (Industrial Revolution) and grew more complicated, more situations arose (long work hours, traveling for work, divorce etc.) where the father’s teaching role was taken over by others.

The fundamental problem in the continuation of a decent life everywhere in the world is the question of the socialization of young males.

There is a need to initiate all boys, because most of the development of the young male’s heroic identity takes place during the transition from adolescence to young adulthood.

Initiation rituals for teenage boys in America are basically non-existent.

Some of the primary experiences and lessons a boy goes through in an initiation are:

The decline in these experiences is evident in our society, resulting in behavior disorders, at-risk youth, and various emotional disorders.

Today, initiation into manhood is conducted in unconscious manner as young men unthinkingly try to initiate themselves by the way they drive, drink, rebel against their parents or society, or treat women.

Ask yourself this question. “What can we all do to shape boys into healthy men?”

A boy needs adventure and a sense of mission, competition, group involvement, and a healthy male example. It is these very same needs that people fear, and if not met, are found in unhealthy ways and examples.

I hope I’ve calmed some fears and explained what both a “rite-of-passage and initiation” mean, I also talk about it at length here on The Tom Roten Morning Show.

Finally, I hope I’ve conveyed the importance of these in an adolescent boy’s life as he navigates the turbulent teens.